Not my most extravagant idea but it was sure fast, lite and tasty. Not to mention the toddler was in love! Before I get into the idea I have a confession to make. I never tried vanilla pudding until I made this. That's right. I'm 32 years old and never had vanilla pudding. Why? Well as my mom likes to say "I was stubborn." Apparently when I was a kid if it wasn't chocolate I wouldn't eat it. Pudding, ice cream, cake, whatever. It didn't matter. By age 3, I was already a choc-o-holic. So I just grew up just thinking I didn't like vanilla and this lasted well into my 20s!

Ok, so I am stubborn. I admit it. But I can also admit when I'm wrong. Vanilla is AWESOME!

Anyway, the toddler insisted we make vanilla pudding and as soon as I tried it I knew I MUST pair it with banana. The sprinkles were the toddlers addition. 🙂 (I was also thinking a crumbled graham crackers would be a nice topping too!) 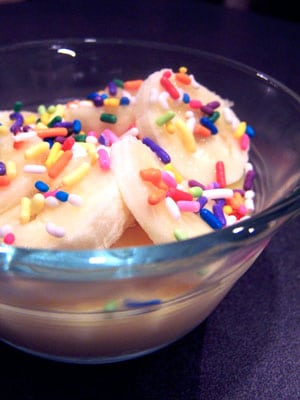 I'm totally making these for my next play date! 🙂

Make the pudding according to package with the skim milk.

Pour into four individual cups and let sit for 5 minutes. Top with banana slices and sprinkles.