Let me tell you a little story about me and Indian food.

It all starts in northeastern Pennsylvania in the '80s. I grew up with an Italian mother who made a pot of homemade sauce once a week. We cooked a lot and lived on pasta and things like stuffed peppers and (as weird as this sounds with an Italian mom) pierogies and piggies in a blanket (stuffed cabbage). NEPA was filled with church bazaars heavily influenced by the Polish, Italian and Irish backgrounds of the people who live there. Potato pancakes and sausage and peppers were always a big treat. My stepfather still goes nuts for kielbasa and brings it every year on Thanksgiving.

Note: I never came around on Haluski.

When we would eat out or order in, it was pizza or Chinese food. That was about as "ethnic" as we'd get.  Maybe I was living under a rock, but I can't remember anything even resembling a sushi place or Thai or Indian. Not back then anyway. Now there seem to be more options.

When I moved to the Baltimore area I was A.) in shock they don't serve potato pancakes at their fairs and B.) immediately in awe of all the ethnic-inspired restaurants in the city.

About a year after I moved here, my co-workers wanted to go out for Indian. I had NO idea what to expect. The menu scared me. The food terrified me.

Then, a few years later I traveled to Toronto on business with an old friend. He said he knew the BEST Indian food place there and he had to take me.  I was hesitant but agreed.

Well, let me tell you, I was IN HEAVEN. I don't know if it was simply better than the first place or if having someone in the know to help me place my order while taking a more family style approach helped, but I simply fell in love with Indian food that day.

Thankfully there's a great little Indian place about a mile from my house and I try to go for lunch when I can find a willing partner. The Husband is NOT a willing partner. He just hasn't embraced the flavors of Indian food as I have, although, I do have hope. He has joined me on special occasions now and then. It's just a matter of time before I wear him down.

I always wear him down.

Anyway, that was a long intro to my latest idea, Indian-Inspired Chicken and Vegetable Chili. I'm not going to pretend to know the first thing about Indian cooking, but this dish is inspired by the flavors I love so much at my favorite Indian restaurant. It's a great way to get in a ton of veggies, too! 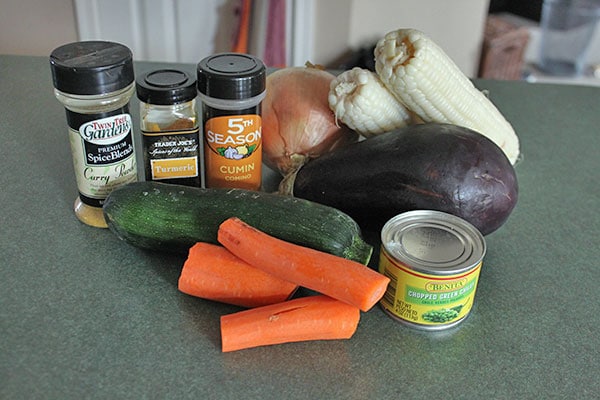 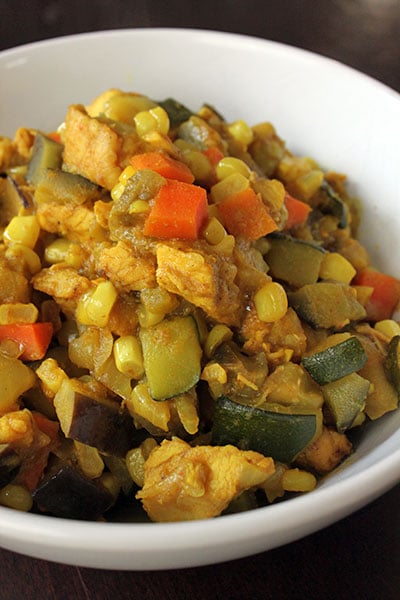 Heat the oil in a medium sized pot and brown the chicken over medium-high heat. While the chicken is cooking, chop the onion and add it to the pot with a pinch of kosher salt.

While the chicken and onion are cooking, dice the zucchini. This is easily done by cutting the zucchini in half, cutting strips and then cutting those strips into strips. Once you do that, simply cut across making small cubes. 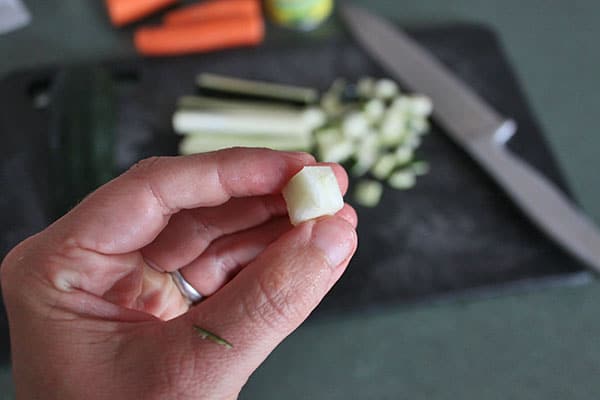 Add the zucchini to the pot. Add it early so some of the moisture starts to get drawn out. Lower the heat to medium if things start to stick.

Cut the carrot into dice, the same way as the zucchini. Add it to pot, and toss everything together.

By this time some of the moisture will be out of the zucchini. Add the chilies and spices so the flavors start to merge. 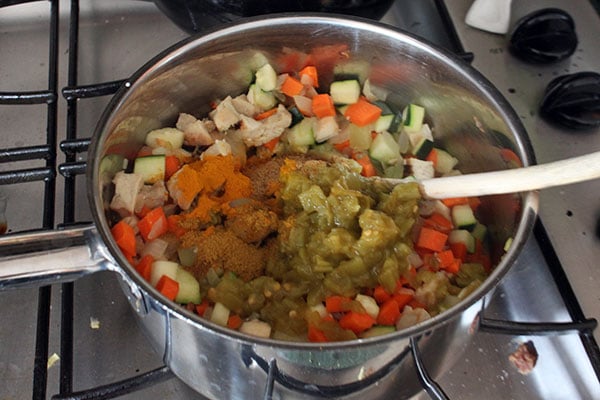 Stir everything together and let it cook over medium heat. 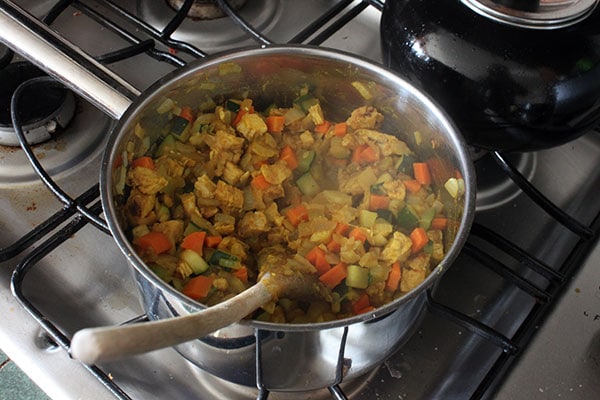 Cut the eggplant into dice using the same method as we did with the zucchini and carrots. 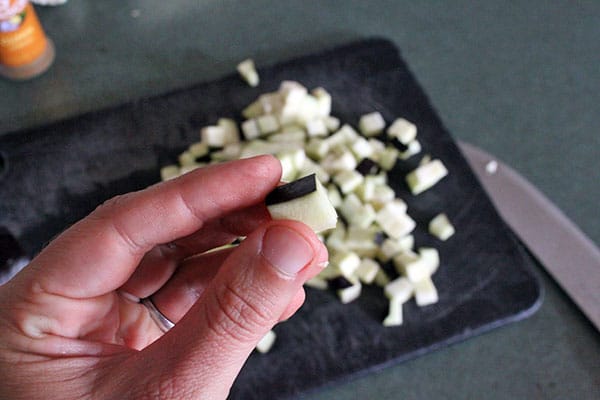 Add the eggplant to the pot.

I waited to use the eggplant until the end as it cooks fast and it will get mushy. I wanted some mush but not too much, so I reserved it until the end.

Cut down the sides of the corn and add to the pot. Cover the chili for 5 minutes allowing the moisture to stay in the pot a bit.

Uncover and cook for an additional 10 minutes, lower to a simmer until you are ready to serve. 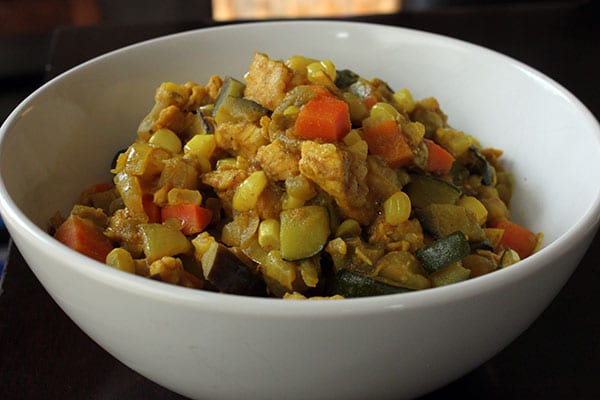 Servings will vary based on the size of your zucchini and eggplant, but both times I made this I ended up with just about 7 cups, so I'm estimating 4 servings at 1 ¾ cups. This is one of those dishes I don't worry about too much. It's mostly veggies.

As a reminder, I calculate WWP using the full nutritional values, ignoring any "free" foods. Feel free to count however you like.

Hope you like it! What's your experience with Indian food?