The nice folks over at Amazing Taste contacted me asking if I'd be willing to review their seasoning packets. Honestly, I totally forgot about them until I came home from my business trip to discover a box of spices on my stoop.

Being away for the last week they couldn't have come at a better time. I was hankering for a home cooked meal but I wanted to make something brainless that didn't require much thought. Cue Amazing Taste Chili Seasoning!

The seasoning packet, of course has a recipe for chili that I couldn't follow. And anyway, I had a boat load of fresh veggies on hand that I really wanted to get creative with.

So I defrosted a ½ pound of lean ground turkey and started chopping! What I ended up with was a delicious veggie filled light chili that was really seasoned perfectly! Unfortunately, the husband isn't a chili fan so you only get my opinion. And the toddler wouldn't try it for some reason, he's really smack dab in the middle of the picky three year old stage. :~) 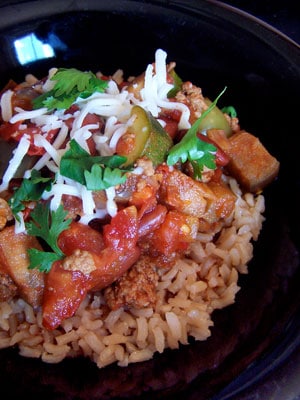 Place a large pot over medium heat and spray with non-stick cooking spray. Add the onion and cook until just turning transparent. Then add the ground turkey and diced egg plant. Cook for a few minutes while breaking up the ground meat with a wooden spoon. After a few minutes you'll notice some liquid coming out of the egg plant, the bottom o the pot will get moist. 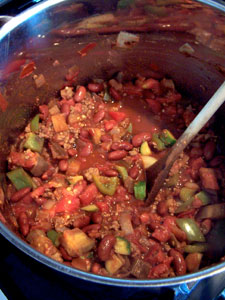 Add the green peppers, zucchini and tomatoes as you chop them all while stirring and coking over medium heat. When adding the tomatoes, keep as much liquid as possible, we are using all the water in the vegetable to create the chili.

Once all the veggies are in the pot and they've been cooking over medium heat for a few minutes, you'll notice more and more liquid. Now stir in the seasoning packet.

Add the kidney beans last and simmer over low heat until ready to serve.

I served it almost immediately over some instant brown rice and topped with a bit of shredded cheese and fresh cilantro. Honesty, it was delicious! The seasoning was dead on and tasted very similar to how I would have seasoned it on my own. It you are a season packet type of cook (I normally don't use only because I like to experiment), I'd recommend trying the Amazing Taste packets, they're only 99 cents and are easy to use in a pinch!