I can't believe I'm about to say this but I miss Whole30! I've come to the conclusion that I thrive in a Chopped-like environment. Give me a handful of ingredients and I start to problem-solve,  and for some reason the constraint causes me to think more outside of the box.

So I decided that even though I'm not officially participating in Whole30 anymore I would use it as inspiration now and then. I rummaged though my fridge this morning to see what I had and came up with a pretty tasty and unique (at least I think so) stew.

The flavor combination of sweet potato, apple and chicken is almost perfect on its own. I just added a couple of spices to kick it up a notch and used almond butter as a thickener. It came together beautifully!

Brown the onion and chicken together in a larger soup pot. Cut the sweet potato and apple while the chicken is cooking and add the cubes to the pot.

Add the cumin, allspice, and broth to the pot. Bring everything to a boil, stir in the almond butter until melted in then reduce to a simmer. Continue to cook for at least 30 minutes until the potatoes are soft and the stew thickens a bit. 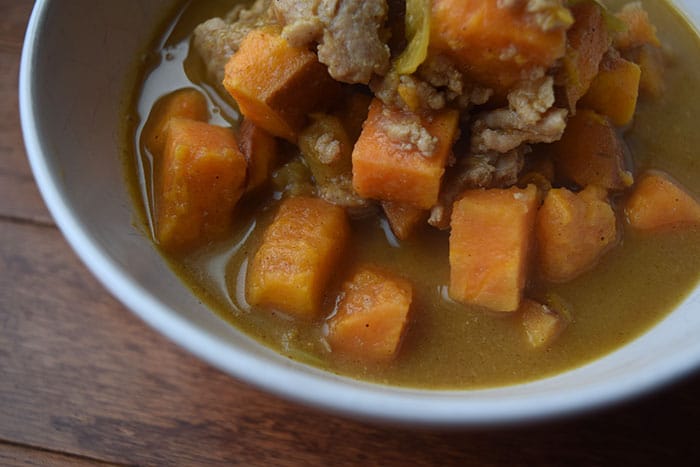 I measured out about 6 ½ cups but I'll keep it at 6 to be conservative on our nutritional information.

Interested in responsibly raised, grass-fed protein sources?  Check out ButcherBox! I've recently become an affiliate. They are a meat delivery service that provides 100% grass fed AND grass-finished beef. No hormones, no antibiotics, no feedlots, all pasture and sustainably raised.

It’s pretty impressive and very convenient if you live in an area where finding high quality meats is hard.