I've been wanting to experiment with a blueberry muffin for FOREVER! I'm not sure this one is complete quite yet. I may tweak it slightly but I'm satisfied with the results and so was the toddler. He ate two! Even the husband took a bite and said they were good. Although he'd never eat a whole muffin. He's just not a muffin man. 🙂

You''ll notice sprinkles in some of the pictures. Sad the say the only way I can get the toddler excited about baking with me is to promise a sprinkle session. He still has fun and participates through the whole process...

...but he's just doing it for the sprinkle pay off. Apparently hanging out with mom in the kitchen just isn't as cool as it once was. 🙁 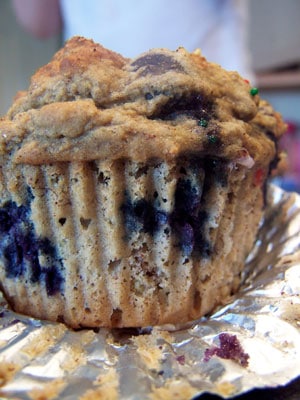 Preheat the oven to 375 degrees

In a medium bowl mash the banana with a fork. Add the egg whites, yogurt, honey, applesauce and extract. Whisk until well blended and a bit “frothy”.

Mix the sifted flour with the banana egg mixture and the blueberries until just moistened. Don’t over mix!

Evenly distribute the batter in the muffin tin cups. Sprinkle with ground cinnamon (or sprinkles!) Bake for about 25 minutes. 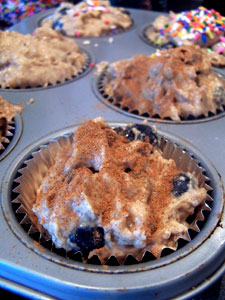 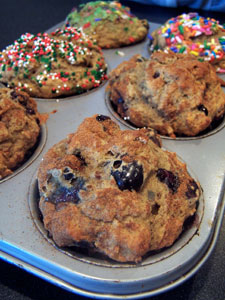