Let me first say this idea only hit me because of our recent influx of fruit. 🙂 I had a slow morning as the little guy had a doctors appointment. So I got to chill a bit instead of rushing in to beat traffic.

So I took the idea behind my quick banana pancakes and gave apple a try. I was pleasantly surprised how they came out. Really Moist and fluffy! But honestly, I wish they tasted a bit more "apple-y" (is that a word?) Next time I may add another apple and double the cinnamon but overall this should give you a good starting point for your own experiments.

I do have to add the toddler, DARN IT, I mean THE KID, really liked them. We dipped in apple sauce and had a blast knocking off the whole batch which is really perfect for 2. 🙂 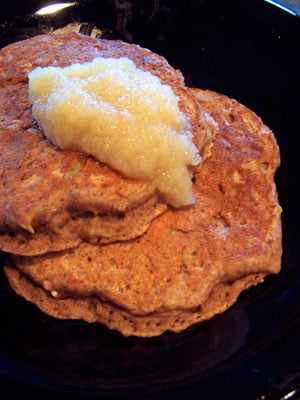 Grate the apple, skin and all. It's slow to start but just keep at it and you'll get grated apple mush. 🙂 Add the egg and milk. Whisk.

In a smaller bowl, add the flour, baking soda, baking powder and cinnamon. Sift into the apple mixture. Mix until just blended.

Heat a skillet over medium heat. Spray with non-stick cooking spray. Using about ¼ cup of batter form pancakes. Cook about 1-2 minutes a side, small bubbles will form but not as many as traditional pancakes. I just peak underneath for a light brown color, then flip.

Here's the little guy chowing down. He really was a fan! 🙂 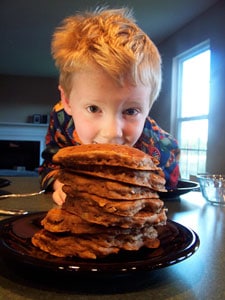 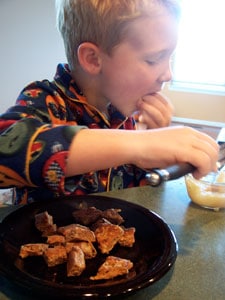