I had another one of those morning where nothing sounded good. I didn't feel like eggs, I'm sick of cereal and I just didn't want to make muffins. I was just craving something different. Twenty minutes later, Apple Cinnamon Breakfast Quinoa was born! What can I say? I LOVE the challenge of inventing! 🙂

It was yummy! If you like the sweetness of applesauce and the texture of quinoa like me, you may actually like this. It took some coaxing but I got the toddler to reluctantly try it. He didn't want to but then when the flavor hit his tongue the gross "I can't believe I eating this face" turned into a "Hmm that was actually pretty good face." lol 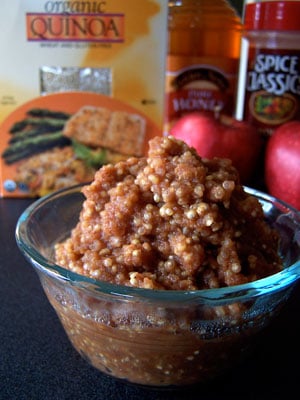 If he was a little younger I'd be able to serve this to him without a problem. Now he's getting set in his ways. DARN IT! ;~P

Core and cut the apple (leaving the skin on) into chunks. Place them in a blender with the lemon juice, cinnamon and water. Blend until smooth. Taste it, if it's not sweet enough add the honey and blend again.

Place the apple mixture and quinoa into a small pan over medium-high heat. Stir continuously until it begins to boils. Once it boils, cover and lower to a simmer. Simmer for 15-20 minutes. The quinoa will absorb the liquid and just begin to turn transparent with little visible rings.

Remove from heat and eat!