This is another one that's going to make mom laugh. Besides onion that, as a child, I despised and now can't live without mushrooms were a close second for most hated veggie. Yet again my mom was right, they are GOOD! especially stuffed! (and in eggs. Yes, I actually had mushrooms twice today.)

For some reason I bought an 8 oz package of mushrooms last weekend. I had no idea what I was going to do with them but they looked so darn good! This morning I decided I better use them before I was forced to throw them out. Especially considering this weekend is so jam packed with events I'll never have time to cook.

So I came up with a stuffed mushroom idea. I wanted something light and tasty using what I had on hand. I have to admit, I hit the nail on the head. They were awesome! I didn't even offer any to the husband in fears he would actually want to try one. :~P

I'm also excited as this is my first recipe to receive 5 out of 5 stars for weight loss and optimal health on NutritionData.com.

Not too shabby for a quick mid day invention! :~P 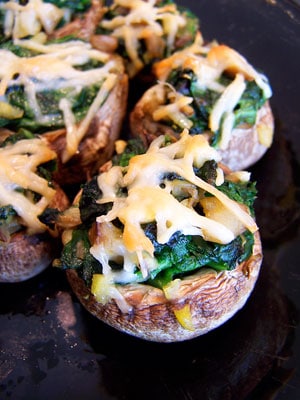 Pre-heat the oven to 400 degrees

Clean the mushrooms and remove stems. Mince the stems and set aside as they will be part of your stuffing.

Heat a small non-stick skillet over medium heat, spray with cooking spray. Add the minced garlic and mushroom stems. Sprinkle with a bit of salt and pepper. While cooking, chop the spinach, you don't want large pieces or stems.

Add the spinach to the skillet a little at a time and cook down sprinkling a bit more salt and pepper.

Remove filling from heat. Line a cookie sheet with aluminum foil and spray with cooking spray. Stuff the mushrooms with the spinach mixture. Really jam it in there you just have more then enough.

Top with parmesan cheese and bake for about 20 minutes! 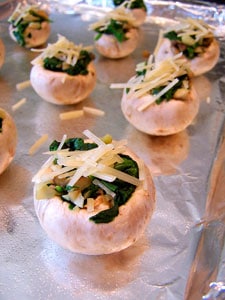 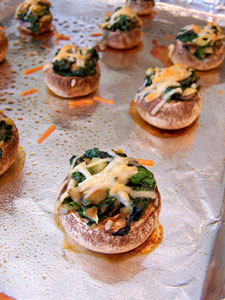